“Making a decision isn’t about knowing every potential consequence. It’s about knowing what you want and choosing a path that takes you in that direction.” 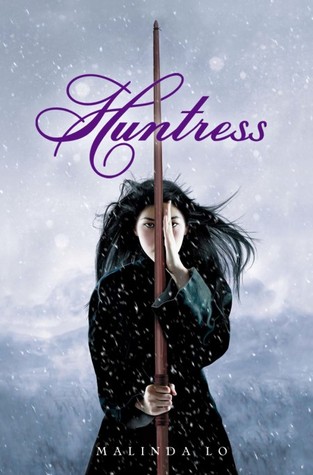 Nature is out of balance in the human world. The sun hasn’t shone in years, and crops are failing. Worse yet, strange and hostile creatures have begun to appear. The people’s survival hangs in the balance.

To solve the crisis, the oracle stones are cast, and Kaede and Taisin, two seventeen-year-old girls, are picked to go on a dangerous and unheard-of journey to Tanlili, the city of the Fairy Queen. Taisin is a sage, thrumming with magic, and Kaede is of the earth, without a speck of the otherworldly. And yet the two girls’ destinies are drawn together during the mission. As members of their party succumb to unearthly attacks and fairy tricks, the two come to rely on each other and even begin to fall in love. But the Kingdom needs only one huntress to save it, and what it takes could tear Kaede and Taisin apart forever.

The exciting adventure prequel to Malinda Lo’s highly acclaimed novel Ash is overflowing with lush Chinese influences and details inspired by the I Ching, and is filled with action and romance.

It seems like this is really a polarizing book on Goodreads. Folks either love it or hate it, and honestly? I enjoyed it!

I think it comes down to the atmosphere, for one. The setting has this foggy gloom over it, this sense of doom and despair that starts off strong as the setting is dying and only gets more intense as the characters come closer to the solution, even crossing into something positively otherworldly at the end.

The characters were easily the other high point of the book. Kaede is so tough and practical, a down-to-earth girl who has her mind made up at all times. On the other hand, Taisin is meek and mild, dedicated to her training as a sage and genuinely moving in her worry about developing romantic ties given the path she wants to take with her life. They circle one another and draw closer in the best ways, and I loved watching their relationship shift and change so clearly. Their relationship, and their interactions with the other main characters, were well-defined and entirely believable, and I loved the element of choice that ultimately defined their paths. There were things that had to be done, but they chose how to move ahead, and I love narratives that challenge fate with choice.

It was the style and pacing of the book that made it hard to give this book more than 3 stars, though, and it seems to be the sticking point for many reviewers. For starters, the POV is anything but concrete. There’s a great deal of head hopping within chapters that can be more than just a bit jarring, especially when you’re expecting one character’s thoughts on the situation and it abruptly shifts to another character’s head.

The other big stumbling block is the pacing. In the last third of the book, the quest at hand picks up, unfolding beyond what I initially expected. The trouble is that it takes two-thirds of the book to get there, and that two-thirds is largely spent traveling, a trope that is incredibly hard to do without turning boring. Thankfully, a lot of the travel scenes were still interesting, and they helped develop Kaede and Taisin in particular, but they still produced a good deal of narrative drag that took some willpower to get through on my part.

On the whole, though, Huntress was a good book, and on top of its other good points, I was delighted to find a fantasy lesbian love story that isn’t bound up in layer after layer of tragedy. It’s a book I would have loved to have had in high school, and I’m glad I’ve discovered it now.