“But what was the point of living so quietly you made no noise at all?” 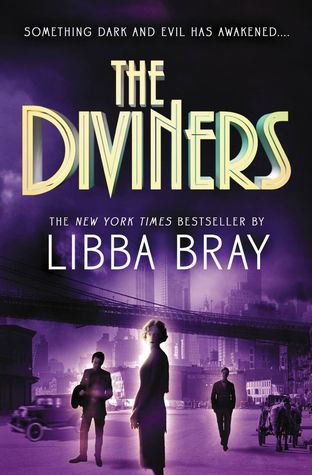 Evangeline O’Neill has been exiled from her boring old hometown and shipped off to the bustling streets of New York City–and she is ecstatic. It’s 1926, and New York is filled with speakeasies, Ziegfeld girls, and rakish pickpockets. The only catch is that she has to live with her uncle Will and his unhealthy obsession with the occult. Evie worries he’ll discover her darkest secret: a supernatural power that has only brought her trouble so far.

When the police find a murdered girl branded with a cryptic symbol and Will is called to the scene, Evie realizes her gift could help catch a serial killer. As Evie jumps headlong into a dance with a murderer, other stories unfurl in the city that never sleeps. And unknown to all, something dark and evil has awakened….

OOF. I know this one has a ton of TW tags, but it’s one part because it’s a paranormal murder mystery, and one part because Libba Bray does not shy away from showing the ugly underbelly of the 1920s. Sure, she gets the glitz and glam going, but she gets all the darker aspects, too, which I seriously appreciate. Better to acknowledge that than to sweep it clear under the rug.

That said, if you can steel yourself for those warnings, many of which do come up in the sequels as well, I recommend this book and the rest of the series a hundred times over. It’s one of my all time favorites, and this is actually only my second time reading it. My reread just made it all the more certain that I adore it.

The characters are probably the main draw for me. There’s Evie O’Neill, arrogant and clever and standoffish, the kind of character who would probably be universally beloved if she was a boy. There’s Sam Lloyd, the quick-thinking, roguish pickpocket (one of my personal favorites, because I always love the thieves). There’s Mabel Rose, dutiful and polite and wishing to be herself instead of someone else’s shadow. Theta Knight, calm and cool actress with a nasty past and an uncertain future. Henry DuBois IV, piano man extraordinaire and kindest soul around. Memphis Campbell, the once-healer now-numbers-runner who loves his poetry and his little brother more than anything in the world. Jericho Jones, stuffy and stoic, afraid to be seen for what he’s become.

It’s an incredible cast, jumping between them all and filling the book with life and fire. Even better, the cast is wonderfully diverse. Henry is gay. Mabel is Jewish. Memphis is black. Sam is the son of immigrants and also Jewish. Evie has depression (based on the way she copes with her brother’s death and the effects it’s had on her), and a drinking problem attached to that.

Of course, this large cast does mean that some characters get more development than others, which is the only reason this book is a 4.5 star and not a 5, but as the series goes on, the POVs shift so everyone gets more and more time. Just in this book alone, though, as the first in the series and as a murder mystery with a classic mystery structure, full character development seems to be a hair out of reach.

But like I said, I adore it anyway. The mystery is fantastic and chilling, and I didn’t realize until this reread how much of it is cleverly laid out in advance, right in front of your eyes if you know what to look for, totally disguised if you don’t. It’s clever, and boy do I love a clever mystery. Besides, there’s not enough YA mystery that I’ve read, and mystery is a favorite genre of mine. That’s another point in its favor.

On top of that, the romance? Oh man. There is a love triangle (RESOLVED IN THE LATER BOOKS IN A GOOD WAY, DON’T WORRY), and that triangle makes use of some excellent tropes along the way, my favorite being the one where the guys don’t get along great, but are super ride or die for the girl and end up making a good team when they set aside their differences just long enough. There’s gotta be a shorter name for that trope, but you get the idea. It’s so good. AND, there’s a second romance that is just so soft and sweet and wonderful and Theta Knight deserves the world is what I’m ultimately saying. While I love a good high tension romance, it was amazing to also get a slow, soft, sweet romance in the same book, especially for a character who seems so prickly and guarded so often.

There’s just so much about The Diviners that I love. The 1920s aesthetic. The refusal to shy away from displaying the harm that stemmed from 1920s bigotry. The wide cast of characters and the diversity that comes along with it. The romances. The blend of mystery and paranormal. Bottom line, I adore this series, and I’m so glad I decided to reread it. This one clocks in at almost 600 pages, but it was worth every minute spent.

Have you read The Diviners before? What did you think? Have you got a favorite character? And while we’re at it, what are you favorite paranormal books, and your favorite mysteries?

0 thoughts on “The Diviners by Libba Bray”