“‘Lady,’ the Master of Security said, shaking his head, ‘if you’re here to warn the king about Eli, then you’re a little late.’

‘No.’ The Master of Security sighed. ‘He’s already stolen the king.'” 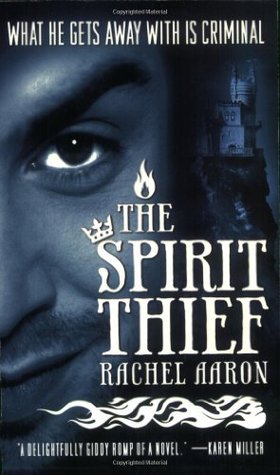 Eli Monpress is talented. He’s charming. And he’s a thief.

But not just any thief. He’s the greatest thief of the age – and he’s also a wizard. And with the help of his partners – a swordsman with the most powerful magic sword in the world but no magical ability of his own, and a demonseed who can step through shadows and punch through walls – he’s going to put his plan into effect.

The first step is to increase the size of the bounty on his head, so he’ll need to steal some big things. But he’ll start small for now. He’ll just steal something that no one will miss – at least for a while.

I’m going to be very, very blunt: this book is a ROMP. Do you want thieves doing things because they can? Large dogs with strong opinions? A stressed out king who really doesn’t understand the scope of what’s happening? Spirits that, like the large dog, ALSO have opinions? Plus a dash of wit and banter, and the sense that something larger and secretive is at work?

Honestly, if you said yes to, like, two of those bare minimum, go pick up this book. Right now.

Basically, the first book in the Eli Monpress series is all about having some very cavalier fun, with a dash of seriousness provided by Miranda, the wizardess who attempts to catch Eli Monpress on behalf of the Spiritualists. Eli and Miranda make an excellent pair, their banter sharp and light, and their particular skills strangely complementary to one another. Toss in Eli’s two other associates, the swordsman Josef and the enigmatic demonseed Nico, plus Miranda’s very large opinionated dog Gin, and you have a highly unusual, absurdly effective crew.

Another awesome thing, on top of those unusual but exciting group dynamics? There’s no romance. Not even a little hint of it. This was so refreshing in that sense, and in the sense that the violence was relatively minimal. And that the antagonists weren’t entirely menacing. It makes The Spirit Thief an excellent entry point into the world, revealing a few lingering threads that pull you in further without demanding your entire life and attention span IMMEDIATELY. It’s almost teasing, in a way: “here’s how Eli deals with a smaller threat; wouldn’t you like to come back, see him tangle with something more…ominous?”

Of course, I do wish we spent more time with Eli. He’s the title character of the series (yes, it’s just called the Eli Monpress series), but we actually seem to spend more time with Miranda and Gin than anyone else. Not that that’s a bad thing, because I loved Miranda! She’s smart and competent and doesn’t take any shit, and her partnership with Gin gives me the warm fuzzies. It’s just that the book only hints at what’s going on in Eli’s head and in his past, and I wish I’d been able to get just a little more of that in this book instead of having to wait for it in the next.

And I suppose I wish the antagonist were a little more fully rounded, a little more menacing. On the flipside, for an adult fantasy novel, this was rather short, and like I said, it has that surface level, inviting feeling that isn’t ready to reveal all of its secrets. A simple villain for the most part suits the lighthearted tone of the book.

Overall, though, I was delighted by this book, and also decided along the way that it’s a crime we’re unlikely to see an animated version of this. Animation would be the ideal medium for an adaptation. It would capture the fluidity, the humor, and some of the oddball magical elements so well, and I feel cheated knowing that it’s unlikely to ever happen. But I can dream, and I can keep reading the series, because now I’m invested in seeing how Eli’s story develops, and how Miranda takes her own skills to new heights.

So, have you read the Eli Monpress books before? Think you’ll start now? And who are some of your favorite fictional conmen? Let’s talk!

0 thoughts on “The Spirit Thief by Rachel Aaron”