“She thought about heroes, and villains, and legends, and monsters. And she decided that whoever told the story was more powerful than all of them.” 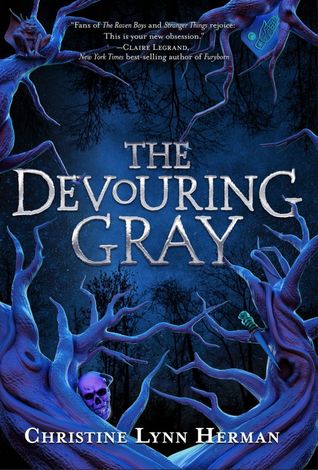 On the edge of town a beast haunts the woods, trapped in the Gray, its bonds loosening…

Uprooted from the city, Violet Saunders doesn’t have much hope of fitting in at her new school in Four Paths, a town almost buried in the woodlands of rural New York. The fact that she’s descended from one of the town’s founders doesn’t help much, either—her new neighbors treat her with distant respect, and something very like fear. When she meets Justin, May, Isaac, and Harper, all children of founder families, and sees the otherworldly destruction they can wreak, she starts to wonder if the townsfolk are right to be afraid.

When bodies start to appear in the woods, the locals become downright hostile. Can the teenagers solve the mystery of Four Paths, and their own part in it, before another calamity strikes?

If you’ve come to this review looking for matters of grief and legacy, kids dealing with weird paranormal happenings, and bisexuality, then you’re definitely going to get what you came for! Plus a touch of woods gore and emotional unsteadiness, of course. I mean, what else were you expecting from teens tasked with keeping an entire town from falling to some kind of hungry monster?

I will say, though, that if you want the creepy woods to be the focus of the book, you’re not going to quite get that. I came in expecting spooky woods, and while I wasn’t satisfied on that count, it was because much more time was spent on the interpersonal relationships of the main characters, especially the relationships dealing most closely with grief and with the history of Four Paths. Violet, for one, has to navigate moving to a new town after the death of her sister, and she has to figure out how to relate to her mother and estranged aunt on top of a town full of people who already know her name when she arrives. A bunch of her major moments of crisis come down to the conflict between working through the loss that’s bearing down on her and figuring out how to live up to or escape from the expectations Four Paths keeps placing on her. On the other hand, Justin keeps wrestling with right and wrong in relation to his place in a founding family, a family tasked with keeping Four Paths safe.

Really, no one makes great choices, but they make realistic choices because they’re upset, or they’re scared, or they’re trying to live up to the standards someone else decided for them because that’s all they really know.

And of the main characters, Harper Carlisle was probably my favorite, because she’s looked loss and legacy in the eye, and she’s spat in it. Her life is her own, or she at least tries to make it so, and I love her so much for it. More than any other character, she knows what it’s like to have the odds stacked against her, to have no one in her corner, and despite all that, she keeps pushing to hold the place she knows she’s earned. Harper is a FORCE in Four Paths, and I’d honestly read an entire series just about her.

In fact, I feel like Harper might have been the most developed character, which is a tiny bit of a bummer. Given how TDG is all about these five core characters coming together and changing the face and fate of Four Paths forever, I wanted to connect to everyone really, really clearly. Instead, I latched onto Harper the most, and was intrigued by Isaac second. Violet and Justin, though, were just okay. Interesting enough that I still really liked the story and their roles in it, but not quite so interesting as to make me desperate to get back to scenes from their POV.

Speaking of which, Isaac gets a single POV chapter in the whole book, and it’s deployed MASTERFULLY. I expect he’ll be much more front and center (and in a bunch of danger) when the second book comes out.

Also in the “wow this is a character-centric book, let’s talk about the characters” corner, there is SO MUCH bisexuality. Violet is bi. Isaac is bi. There are queer adults (queer! adults! they exist!), some queer side characters, and even Rose, Violet’s sister, was queer (she had a girlfriend)! It’s just remarkably queer friendly in so many ways, and I was delighted by that. It also definitely means that the potential romantic climate of the book is, uh…fraught. But in a good way.

Seriously. How many reviews have I complained about the romance? Let’s not go back and count, but we’ll assume the answer is A LOT. Well, in TDG, things are messy. Love is hard when you’re a small town with a dark history and a pressing threat to your future. Toss in some family-specific superpowers, unrequited crushes, and the general strain of being expected to defeat some kind of eldritch horror that can gore a man no problem, and you’re not exactly in the middle of the hottest dating market around. Really, no one in TDG gets a happy love story. There are romantic feelings for sure, crushes building up, but there’s no healthy outlet for any of them, and I think it’s the first time I’ve read a YA book that not only includes romance without making it a total shoe-in or a will-they-won’t-they love triangle, but also doesn’t frame any of the characters as not being good enough, or as the worst possible romance option ever, to be avoided at all cost.

Basically, I don’t remember the last time I read YA with romance this nuanced and realistic and refreshing, so huge kudos for that!

Really, I think TDG was a stellar read. It didn’t get a full 5 star rating from me because I think it was just a hair lacking in certain parts of character development, plus the plot didn’t quite hook me the way the summary made it sound like it would, BUT. It’s still an excellent book, and I’ll definitely be back for the sequel. I want to see Harper Carlisle carve her way through Four Paths, I want to see Isaac Sullivan come to terms with the things and people that haunt him. I want Violet and her mother to start being honest with one another, to really connect, and I want Justin to start exploring what it means to have a spine, to look at his family legacy and judge right or wrong for himself instead of letting the family decide for him. May, too, I suppose I want to see, because she’s shouldered all the expectations in the places where Justin has failed to live up to Hawthorne standards, and she’s made some complicated, flawed, entirely human choices of her own.

This is absolutely a book that doesn’t let go, and I’ll be back for more.

0 thoughts on “The Devouring Gray by Christine Lynn Herman”