Maddie thought her problems were over. She saved the Inn at Havenfall—a sanctuary between magical worlds—from the evil Silver Prince. Her uncle the Innkeeper is recovering from a mysterious spell that left him not quite human. And there are still a few weeks of summer left to spend with her more-than-friend Brekken.

But there’s more work to be done to protect the Inn—Maddie must put an end to the black-market trading of magical objects and open the Inn’s doors to the once feared land of shapeshifters.

As she tries to accomplish both seemingly impossible tasks, Maddie uncovers secrets that could change everything. What if saving everyone means destroying the only home she’s known?

END_OF_DOCUMENT_TOKEN_TO_BE_REPLACED

“Seize the wind. Don’t become the kite that never flies.”

Maia Tamarin dreams of becoming the greatest tailor in the land, but as a girl, the best she can hope for is to marry well. When a royal messenger summons her ailing father, once a tailor of renown, to court, Maia poses as a boy and takes his place. She knows her life is forfeit if her secret is discovered, but she’ll take that risk to achieve her dream and save her family from ruin. There’s just one catch: Maia is one of twelve tailors vying for the job.

Backstabbing and lies run rampant as the tailors compete in challenges to prove their artistry and skill. Maia’s task is further complicated when she draws the attention of the court magician, Edan, whose piercing eyes seem to see straight through her disguise.

And nothing could have prepared her for the final challenge: to sew three magic gowns for the emperor’s reluctant bride-to-be, from the laughter of the sun, the tears of the moon, and the blood of stars. With this impossible task before her, she embarks on a journey to the far reaches of the kingdom, seeking the sun, the moon, and the stars, and finding more than she ever could have imagined.

DISCLAIMER: I received an eARC from the publisher via Netgalley in exchange for an honest review.

END_OF_DOCUMENT_TOKEN_TO_BE_REPLACED 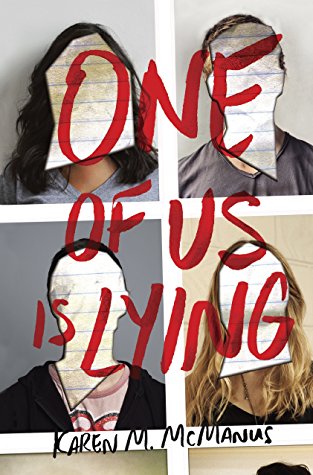 On Monday afternoon, five students at Bayview High walk into detention.
Bronwyn, the brain, is Yale-bound and never breaks a rule.
Addy, the beauty, is the picture-perfect homecoming princess.
Nate, the criminal, is already on probation for dealing.
Cooper, the athlete, is the all-star baseball pitcher.
And Simon, the outcast, is the creator of Bayview High’s notorious gossip app.

Only, Simon never makes it out of that classroom. Before the end of detention, Simon’s dead. And according to investigators, his death wasn’t an accident. On Monday, he died. But on Tuesday, he’d planned to post juicy reveals about all four of his high-profile classmates, which makes all four of them suspects in his murder. Or are they the perfect patsies for a killer who’s still on the loose?

Everyone has secrets, right? What really matters is how far you would go to protect them.

END_OF_DOCUMENT_TOKEN_TO_BE_REPLACED

“Our town was small enough that I never developed a healthy fear of strangers.”

You stop fearing the devil when you’re holding his hand…

Nothing much exciting rolls through Violet White’s sleepy, seaside town… until River West comes along. River rents the guest house behind Violet’s crumbling estate, and as eerie, grim things start to happen, Violet begins to wonder about the boy living in her backyard.

Is River just a crooked-smiling liar with pretty eyes and a mysterious past? Or could he be something more?

Violet’s grandmother always warned her about the Devil, but she never said he could be a dark-haired boy who takes naps in the sun, who likes coffee, who kisses you in a cemetery… who makes you want to kiss back.

Violet’s already so knee-deep in love, she can’t see straight. And that’s just how River likes it.

END_OF_DOCUMENT_TOKEN_TO_BE_REPLACED

“Grief is a kind of war, I think now. Loss is like a bullet. A person can only take so much.”

Molly Mavity is not a normal teenage girl. For one thing, her father is a convicted murderer, and his execution date is fast approaching. For another, Molly refuses to believe that her mother is dead, and she waits for the day when they’ll be reunited . . . despite all evidence that this will never happen.

Pepper Yusef is not your average teenage boy. A Kuwaiti immigrant with epilepsy, serious girl problems, and the most useless seizure dog in existence, he has to write a series of essays over the summer . . . or fail out of school.

And Ava Dreyman—the brave and beautiful East German resistance fighter whose murder at seventeen led to the destruction of the Berlin Wall—is unlike anyone you’ve met before.

When Molly gets a package leading her to Pepper, they’re tasked with solving a decades-old mystery: find out who killed Ava, back in 1989. Using Ava’s diary for clues, Molly and Pepper realize there’s more to her life—and death—than meets the eye. Someone is lying to them. And someone out there is guiding them along, desperate for answers.

END_OF_DOCUMENT_TOKEN_TO_BE_REPLACED

In the kingdom of Sempera, time is currency—extracted from blood, bound to iron, and consumed to add time to one’s own lifespan. The rich aristocracy, like the Gerlings, tax the poor to the hilt, extending their own lives by centuries.

No one resents the Gerlings more than Jules Ember. A decade ago, she and her father were servants at Everless, the Gerlings’ palatial estate, until a fateful accident forced them to flee in the dead of night. When Jules discovers that her father is dying, she knows that she must return to Everless to earn more time for him before she loses him forever.

But going back to Everless brings more danger—and temptation—than Jules could have ever imagined. Soon she’s caught in a tangle of violent secrets and finds her heart torn between two people she thought she’d never see again. Her decisions have the power to change her fate—and the fate of time itself.

END_OF_DOCUMENT_TOKEN_TO_BE_REPLACED

“Our ancestors were dragons. And now we’re were-dragons—humans capable of turning dragon.

Or dragons capable of turning human.

In Sky Hawkins’s family, leading your first heist is a major milestone–even more so than learning to talk, walk, or do long division. It’s a chance to gain power and acceptance within your family, and within society. But stealing your first treasure can be complicated, especially when you’re a wyvern–a human capable of turning into a dragon.

Embarking on a life of crime is never easy, and Sky discovers secrets about her mother, who recently went missing, the real reason her boyfriend broke up with her, and a valuable jewel that could restore her family’s wealth and rank in their community.

With a handpicked crew by her side, Sky knows she has everything she needs to complete her first heist, and get her boyfriend and mother back in the process. But then she uncovers a dark truth about were-dragon society–a truth more valuable and dangerous than gold or jewels could ever be.

DISCLAIMER: I received an e-ARC from the publisher via Netgalley in exchange for an honest review. Any quotes are subject to change between now and the release date.